I have noticed that when users come to the forum looking for support/troubleshooting, they are extremely frequently using Avogadro 1.2. I suspect this is because the existence of Avogadro 2, and where to download it from, is somewhat hidden to new users…

Googling “avogadro software” gives the website, avogadro.cc, as the first result. I should think most people hear of avogadro by word of mouth, either on or offline, and thus surely google and then the official website must be the primary way people are introduced to avogadro. However, clicking the download button on the main avogadro website directs the user to sourceforge where an automatic download of Avo 1.2 begins. I think this may be why most new users end up using 1.2, and this surely hurts user retention as Avo2 is so much more stable and capable. Can I suggest that the download button instead links to GitHub, to the latest release page? Or alternatively, to two.avogadro.cc/install, where the options are well laid out?

The same applies to the “manual” link on the avogadro.cc homepage. At the moment this links to the docs for Avo1.2, but this is of course now hopelessly out of date. I know the new docs are not yet comprehensive, but maybe it is worth redirecting the link to them already/in the near future?

Avo2 is still in beta, sure, but looking at the number of times you @ghutchis have to tell people to download a newer version, it is clearly currently too difficult for people to find. You must be tired of typing the same response to people every time!

At the end of last summer, the survey suggested that a lot of people hadn’t tried Avo2 yet because it was missing feature X or Y or Z.

I’ll be posting a thread on “simple things you can do to help” soon.

My semi-realistic goal is to get a 2.0 release by October. I’m pretty sure SourceForge will disappear over time, but we’ll also post releases there.

I want something like that using Python (Sphinx) or JavaScript… 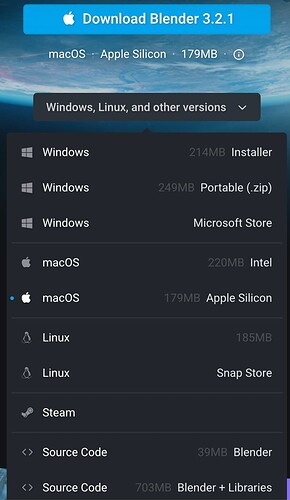 I suspect this is because the existence of Avogadro 2, and where to download it from, is somewhat hidden to new users…

Some users, like me, may know that Avo2 exist and still use Avo1.

Some users, like me, may know that Avo2 exist and still use Avo1.

Is there a particular reason? Missing feature? Bug?

Is there a particular reason?

A few. Keep in mind I’m a beginner in computational chemistry so I may not appreciate software being able to do some peculiar advanced stuff and my demands are quite low-level ones.

To be honest, I was slightly annoyed (to the extent that I didn’t want to open it anymore) when I first opened Avo2. The very first thought that came to my mind: where are all the features?

Whenever I say I don’t know I mean that I could figure it out in Avo1 fairly quickly (without reading docs), but could not in Avo2.

No Auto Optimization Tool in header.

Interesting. I think you have a point as far as discoverability. I was going to ditch it in favor of a check / uncheck in the menu bar, but it’s worth doing both.

As I mentioned, the new optimization framework is coming. It will bring back constraints and auto-optimization, while enabling you to use other programs / ML potentials etc. for optimization too.

Whenever I tried to open Input Generator on any multilayered file the program crashed.

Interesting. Haven’t seen that one, but I’ll look into it.

I still don’t know how to visualize MOs or vibrations in Avo2.

The “pop up docks” were useful, but have been further down the “finish 2.0” checklist.

Conformer search in Avo1 was far from being exhaustive, but it was still useful.

Believe it or not, I hadn’t noticed there wasn’t a conformer search command in the Open Babel extension. (My group has a whole separate conformer infrastructure.)

Feedback is helpful - not least because I don’t know what I don’t know (e.g., particular features that are keeping people from switching). Which is the point for the forum and for Issues · OpenChemistry/avogadrolibs · GitHub

Interesting. I think you have a point as far as discoverability.

Also, most people who used Avogadro for teaching actually liked seeing the animation of how molecule responds to the force field and gradually reaches the local-min geometry. But I do agree that speed is more important for people who use it for QM calcs.

Thank you. But let’s compare the UX: 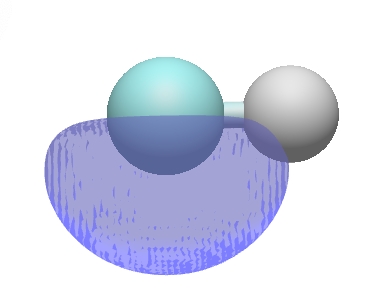 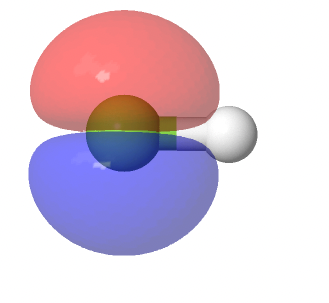 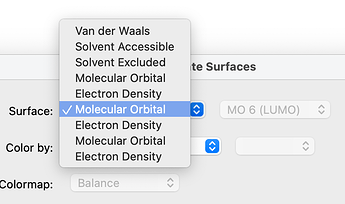 Notice how it’s also locked at MO 6 even though I visualized MO 5, and also you can’t switch from MO 6 to MO 1 unless you pick a different Molecular Orbital option in the surfaces dropdown. 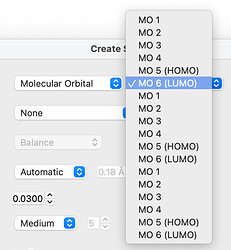 I do understand this is normal for new software to have bugs or things not working properly. I’m only showing why a user may decide to stick to Avo1 at the current state of Avo2.

Which is the point for the forum

Also, I really appreciate the use of Discourse for this.

Also, I may not be representative of the target audience, but I found these two pictorials:

to be much more intuitive than

I mean, in hindsight, I can understand how they were developed, but because I was a user of Windows XP/7, the first icons clicked with me without any info from “highlights” and I never mistook one for another.

I’m only showing why a user may decide to stick to Avo1 at the current state of Avo2.

BTW, the 1.97 bug with the half-orbitals was fixed:

Fix rendering bug that dropped half of the MO rendering

Signed-off-by: Geoff Hutchison <geoff.hutchison@gmail.com> Developer Certific…ate of Origin Version 1.1 Copyright (C) 2004, 2006 The Linux Foundation and its contributors. 1 Letterman Drive Suite D4700 San Francisco, CA, 94129 Everyone is permitted to copy and distribute verbatim copies of this license document, but changing it is not allowed. Developer's Certificate of Origin 1.1 By making a contribution to this project, I certify that: (a) The contribution was created in whole or in part by me and I have the right to submit it under the open source license indicated in the file; or (b) The contribution is based upon previous work that, to the best of my knowledge, is covered under an appropriate open source license and I have the right under that license to submit that work with modifications, whether created in whole or in part by me, under the same open source license (unless I am permitted to submit under a different license), as indicated in the file; or (c) The contribution was provided directly to me by some other person who certified (a), (b) or (c) and I have not modified it. (d) I understand and agree that this project and the contribution are public and that a record of the contribution (including all personal information I submit with it, including my sign-off) is maintained indefinitely and may be redistributed consistent with this project or the open source license(s) involved.