Hey there,
i am trying to use avogadro with the newest Mac OS. I downloaded the version from the website, which says in the about section that it the 1.2 version. My Goal was to create DNA visualization. The Problem I am having is that the build interface doesn’t pop up. By any means I am not a software developer so that I can’t just download a new build from your git hub and I am ready to go. Could you help me with the Problem?
Best regards
Falko

Can you be a bit more specific about the “build interface doesn’t pop up?” Maybe a screenshot?

I have 1.2 working just fine on my MacBook M1 with the latest macOS.

Hey, thanks for the super quick response. The Problem is just that in the upper menu interface that when I click on the build Option… nothing happens. I would expect a drop down menu just like in the documentation.

Do you see menus under others?

I’m confused because the super-wide menu bar looks unusual. Can you send me a full screenshot? (Command-Shift-3) I’m wondering if there’s a conflict with something else on your Mac (e…g, a menu bar utility or something). 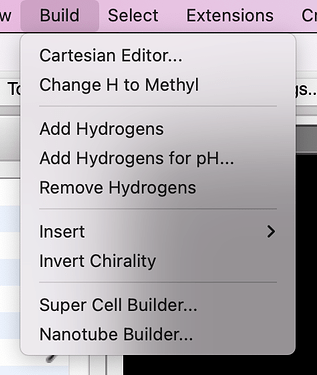 Hey I really appreciate the help. I am also confused about the bug that is got. Like I said I use the latest version of Mac OS which runs on a M1 Chip… don’t know if I might have to start the Programm with Rosetta? It seems everything is working except the build Menu Popup, which contains the tools I want to use.
I hope the Screenshot can tell you more.
Best Regards
Falko 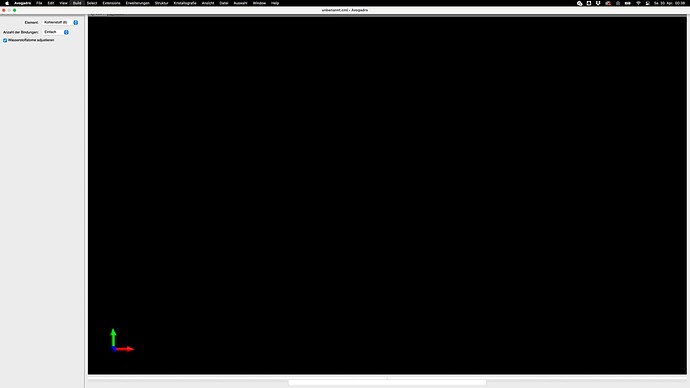 I think somehow you have a “Build” (English) menu, but suspect the tools you want are under the translated menu “Struktur”

Not quite sure why you have the English menus too…

Hope that helps - Avogadro has significant translations although I don’t know how complete the German translation is. (Which is probably the problem here with the duplicated menus.)

As for Rosetta, if it’s launching at all then Rosetta is running correctly. We only released Intel binaries … because 1.2 was released some time ago.

I have Avogadro 1.9x running on my M1 so I should be able to release a native Apple Silicon for the next release. (It’s really fast.)