One of my students is rendering a bunch of orbitals and noted that when the mesh is opaque, it’s lit from the bottom: 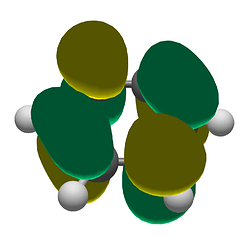 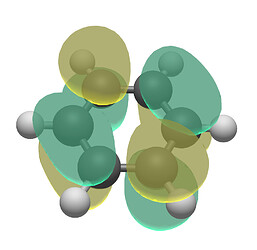 I personally prefer the new version which is a bit more conventional: 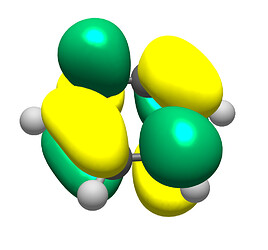 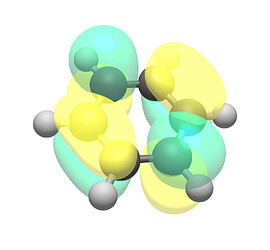 Feedback? I’m still tweaking the lighting a bit. To be honest, I like the “shiny” version more for the opaque, but I tend to like the current / original translucent version more.

The pull request is here if you’d like to try it out:

Tweak the mesh lighting .. now lights "from the top"

Gives a more conventional look with some specular shine Signed-off-by: Geoff …Hutchison <geoff.hutchison@gmail.com> Developer Certificate of Origin Version 1.1 Copyright (C) 2004, 2006 The Linux Foundation and its contributors. 1 Letterman Drive Suite D4700 San Francisco, CA, 94129 Everyone is permitted to copy and distribute verbatim copies of this license document, but changing it is not allowed. Developer's Certificate of Origin 1.1 By making a contribution to this project, I certify that: (a) The contribution was created in whole or in part by me and I have the right to submit it under the open source license indicated in the file; or (b) The contribution is based upon previous work that, to the best of my knowledge, is covered under an appropriate open source license and I have the right under that license to submit that work with modifications, whether created in whole or in part by me, under the same open source license (unless I am permitted to submit under a different license), as indicated in the file; or (c) The contribution was provided directly to me by some other person who certified (a), (b) or (c) and I have not modified it. (d) I understand and agree that this project and the contribution are public and that a record of the contribution (including all personal information I submit with it, including my sign-off) is maintained indefinitely and may be redistributed consistent with this project or the open source license(s) involved.

Counting the examples from 1 to 4 from top to bottom, as concept I would like the #3 the most followed by pattern #4 (vide infra) because pattern 1 and 2 both tend to be too dark (especially the first pattern). I hereby think about e.g., poster sessions. Imagine to see such an illustration from distance (perhaps anyway on a darker background) one, two aisles away; this is going to yield a gray/black blob hiding away (camouflage like) which is not attractive (for me).

For the selection of colors of the orbitals, I would like to suggest to consider an additional choice to choose from/select to grasp easily positive vs. negative which is retained if the publication is printed on paper (still many do)/xerox in b/w or grayscale: yellow-white-purple.

One may mimic the outcome preparing the illustration (e.g., in inkscape, extensions → color → grayscale) in a GUI based program, or with imagemagick on the command line (convert input.png -colorspace Gray output.png). The present choice isn’t well suitable for color blindness (inkscape offers to mimic a few types, filters → color → color blindness; optional with live preview). In this perspective and for similar reasons to abandon a color scale in jet scheme for one with continuous change in hue (like viridis), I would suggest something in line with ogre-white-purple.

As an illustration, a visualization created with Jmol (entry interactive documentation):

I’m not sure about the color coordinates Jmol then uses, however in appearance on screen, it comes close to the diverging colormap (#f1a340, #f7f7f7, #998ec3 in hex) offered by colorbrewer.

Clicking through the types of color blindness inkscape visualizes/creating a gray-scale copy with the pattern suggested by you/your student looks like the two pattern could be offered along each other in addition to the red/blue so often encountered: 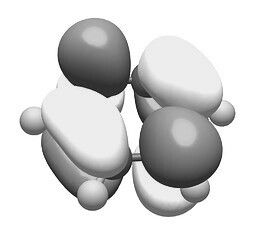 For both color palettes, there might be some overlap of the colors regarding the orbitals with the colors to designate the atoms (e.g., yellow about sulfur, different tints of green for fluorine vs. chlorine, etc.). Because the optional use of atom labels may prevent confusion, this should not be an issue.

(Not touching the question if color blindness is an example of section 504 ADA/rehabilitation act.)

Completely agreed on the need to set colors. While red / blue are popular, they match oxygen and nitrogen atom colors and aren’t great for color blindness or reproducing in greyscale as you mention.

You can set the colors and opacity as you want now: 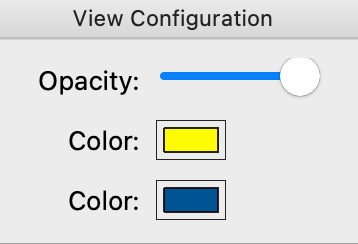 This was an important feature under Avogadro.

Certainly I suppose we could try pushing for better default colors.

As far as the color ramp for electrostatics … the current plan would similarly allow users to pick a gradient colormap … not just red - white -blue or red - green - blue.

My default pick would probably cool-warm with RdYlBu a close second.