Summer’s over, so Google Summer of Code comes to an end. As a participant, I feel I’ve learned many useful skills during these months (also had lots of fun!). Let’s review the improvements I’ve made to Avogadro, what I’ve been working on this summer. I’m glad to present… 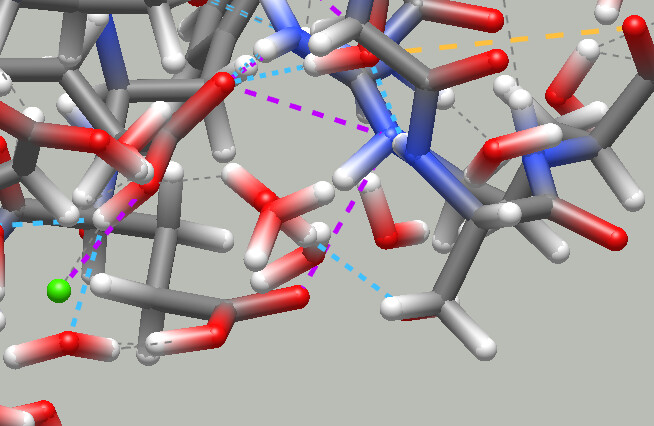 Avogadro 1.96 introduces “close contacts”, which show dashed lines between atoms that are closer than some threshold. In Avogadro 1.97 this is expanded to include salt bridges, “bad” contacts (repulsive forces between same-sign charges), as well as hydrogen, chalcogen and halogen bonds, which take angles between electron pairs into account for better prediction. 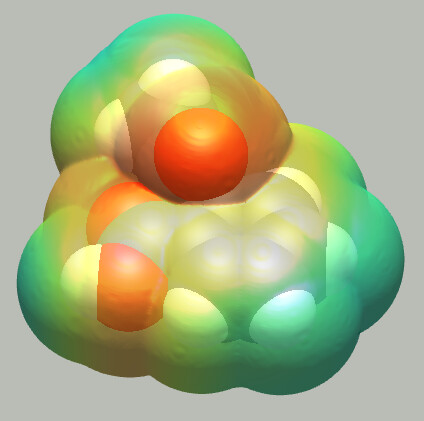 With Avogadro 1.97 finally comes the ability to compute surfaces for a molecule. Van der Waals, Solvent Accessible and Solvent Excluded surfaces are supported, at various resolution and smoothing levels. Additionally, surfaces can be colored by electrostatic potential, also allowing to choose the model to use. @ghutchis and I worked together to add a tool that allows one to easily create coordination complexes, or add fuctional groups to an organic molecule. Polydentate and haptic ligands are properly aligned around the selected geometry. This tool will be availbale in 1.98. 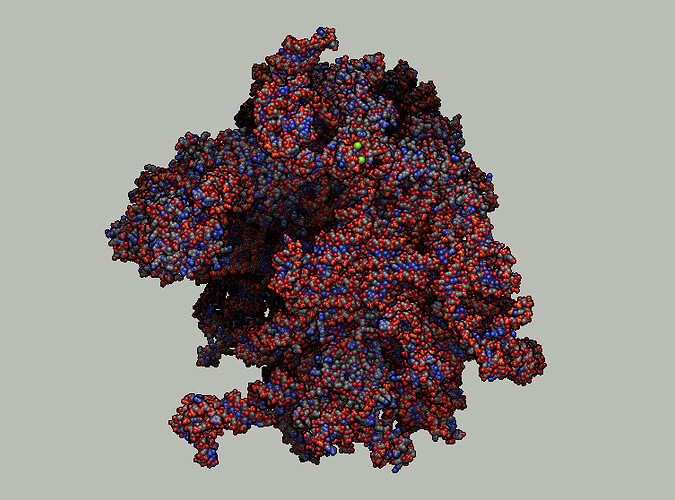 This wasn’t actually part of my original schedule, but I had spare time so added it as a bonus feature. A new shader pipeline is now in place to add real-time ambient occlusion and edge detection, so complex molecules are better visualized. A dialog offers configuration options over these shaders. This will appear in 1.98.

While not offering any extra functionality, these are important to keep working with very large molecules feasible, especially on slower machines. During this summer I optimized PDB import to be tens of times faster, as well as some nice performance figures for other operations (e.g. adding hydrogens, enabling cartoons…). Most of this work is already in 1.96.

So, that’s it! I hope the Avogadro community will find some nice uses for these new features. I’ve mostly focused on uses for biochemistry (as I’ve used Avogadro to better understand it myself, reminder that I’m a med student!), but I hope it benefits everyone in some way. Thanks for the opportunity and for this wonderful piece of software!

This is outstanding! Thank you!

What’s the practical limit for coloring surfaces by electrostatic potential? It works like a charm with small molecules, and I wonder what’s the largest system you’ve tested?

Hi, @seal. I’ve tested small proteins on my slowest machine and they take a few minutes but turn out fine. Unlike mesh generation itself, mesh coloring is only as memory-constrained as the computation method (which is handled by Open Babel) is, but it can be pretty slow for very large molecules. Hope this helps.

Edit: the largest molecule I tried it on was aconitase.

I’ve tested small proteins on my slowest machine and they take a few minutes but turn out fine.

It’s worth mentioning that the surface and mesh generation is multi-threaded. There are faster GPU-enabled methods out there, but that would be for a future summer project.

(One hold-up is that we need to switch to an OpenGL 3.2 core profile, which enables more shader features.)

The Open Babel charge methods are not multi-threaded, although you can write Python scripts to access other codes. (I’m working to convince a few ML groups to offer plugins.)

the largest molecule I tried it on was aconitase.

Any reason why it’s opaque from one side 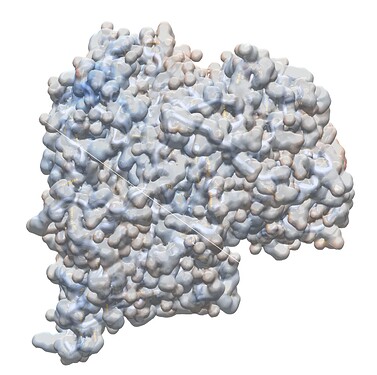 but translucent from the other side? 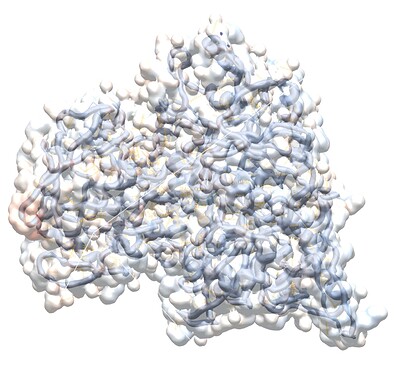 @seal To ease replication: what is the underlying structure model (e.g., pdb code)? The upper representation doesn’t look like fully opaque, on occasion a little bit of blueish licorice (still) is visible, see the blue rectangles marking some areas: 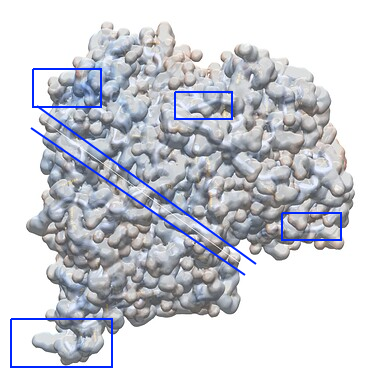 Is there a particular reason in the structure model, or the program why the illustration features a colorless diagonal (between the two blue lines)? Given the current projection, it isn’t convincing strongly this would be a plane/axis of symmetry.

what is the underlying structure model (e.g., pdb code)?

It’s the 1ACO, discussed above