Hi all,
I’m new to Avogadro and noticed some translations missing in Dutch. I wanted to contribute, but
unfortunately the documentation I found on Localization - Avogadro doesn’t seem to be accurate: Launchpad says " Avogadro does not use Launchpad to translate its messages. and the link to the mailing list gives a 404-error.
Where can I go with my good intentions?

We are pushing to finish Avogadro2. Translations are now available on Weblate which integrates more cleanly into our repositories.

I suspect the new translation needs some help - we migrated the Launchpad translations from Avogadro 1.x, but obviously there have been many changes.

I should also mention that if questions come up during the translation / localization, please post here! There are often some strings that need clarification… some of the initial code made assumptions that complicate translation … I think we’ve fixed most/all of them now.

Thank you for your prompt reply.
I’m familiar with Weblate - I translated PrivacyIDea using it.
I see there is a language pack Dutch and Dutch (Belgium), which is really sad. There is only one Dutch. It is guarded by an organisation https://taalunie.org. Of course there are variants between Dutch in the Netherlands and Dutch in Belgium, but also between Dutch in the west of Belgium and Dutch in the east.
I think Dutch translators should find common grounds and use them in stead of splicing the language packs in variants, based on a few differences, thereby increasing workload and cultural differences in stead of unifying people and getting something done.

So being based in Belgium, I’m going to contribute Dutch, since that is the most evolved.

Weblate, like many platforms, allows multiple translation codes because in some cases, localization is very important (e.g., US vs. UK spelling, or some differences between Spanish in Spain and Mexico / Latin America, etc.)

At the moment, it seems as if there’s only an nl option with Avogadro, which is certainly where I’d encourage a Dutch translation to start.

Where do you see the Dutch (Belgium) option?

I’m aware of the differences between US/UK spelling etc.
For some software projects, there are also problems with locales, nl_NL, nl_BE - that could also be a reason to work with different language packs that could contain the same strings, apart from a few. For Dutch this is not a problem, since the locales are more or less the same. nl_BE is half copied from fr_BE and the other half from nl_NL

So, if the locale is not used or it is and the settings that are used are not different between NL and BE, I suggest to remove Dutch (Belgium). Important locale items, like decimal separator, thousand separator, names of days, months, … are all the same in the Netherlands and the Dutch speaking part of Belgium. I’m translating Moodle now for nearly 20 years and we still manage fine with one Dutch language pack and using the nl_NL locale.

I suggest to remove Dutch (Belgium).

I guess my question is where do you see this as an option?

Good question. I haven’t seen any indication of this, but I can certainly ask the Weblate developers. It would certainly be useful for some localizations.

Okay, I don’t see a great way to do this automatically with Weblate, but it should be possible with the script that updates the translation templates (i.e., check on the “child locales” and update un-translated strings).

I’m going to do this for the en_GB, en_AU and en_CA - by default it will copy the en_US strings for untranslated portions.

Hi Geoff,
Sorry, I missed your previous post.
I’m searching where I saw the Dutch Belgium translation and I see that it is offered as a possibility on Avogadro @ Hosted Weblate, rather then a started language pack. My mistake.

It looks like this in my browser. It’s probably a Weblate issue. 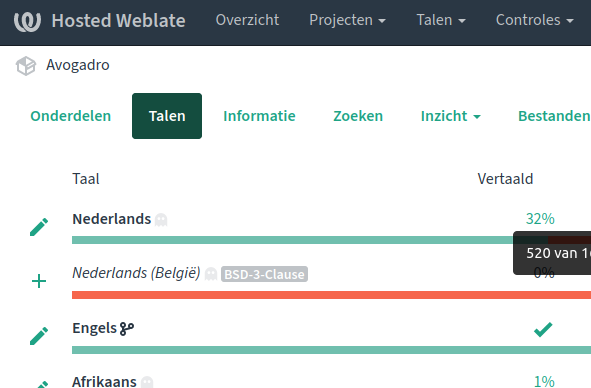