I believe this to be a bug with Avogadro2 in which I cannot execute the auto-optimization tools.

I’ve installed Open Babel separately in order to even see the tool menu option. And I run the Optimize Geometry option in hopes it will clean things up a bit.

But regardless of my molecules, as I’ve attempted to start fresh and demo across multiple instances, I’m getting an error that reads: “Number of atoms in obabel output (#y) does not match the number of atoms in the original molecule (#x).” 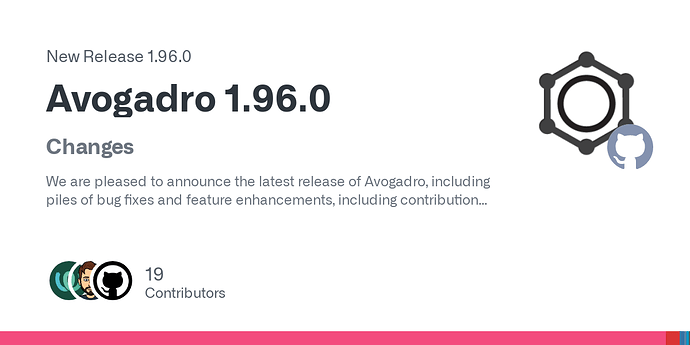 Ahhh that has done it. Thank you! Is Avogadro 1.2 the latest for that version, obviously I know that’s been archived, but it’s still in use in the office I’m learning from so dabbling in both editions.

Also may want to be aware that the download link on the Avagadro main site takes to Source Forge, which does indeed have the working 1.2 original build but is only 1.90 for Avogadro2. I had also downloaded 1.91 through Open Chemistry looking around for suggestions to get 2 but it not being part of the automatic download at Source Forge from the download link.